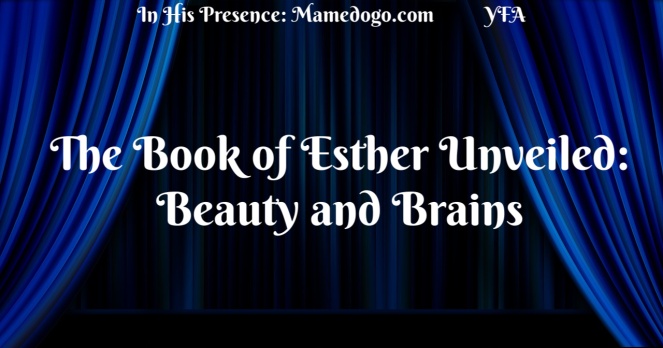 In this blog, I will be sharing some insights which I have titled “The Book of Esther Unveiled”: Beauty and Brains. I have always been fascinated by Esther’s story because it appears to me that she had no choice in any of the situations in which she found herself. She found herself in captivity and  then later “taken” to be part of the young women being groomed to be queen of Persia. Such are some of the circumstances that we may find ourselves in as women. Yet through all these circumstances, God was working things out for the greater good of her people; the children of Israel. It goes to show that God has a purpose for our lives.

It is Still A Man’s World Out There

It is still pretty much a man’s world out there today as it was back in the days of Esther. Queen Vashti was dethroned for insubordination as we see in the book of Esther Chapter One. She earned this dubious honor as a result of refusing to appear before the king and his cronies. It would seem that the king was into his cups during this time of celebration and thought that what better way to crown this joyous occasion than to parade and flaunt the beauty of his queen before everybody.  As a result of Vashti’s refusal, which thereby dishonored the king, the men said among themselves, “Let us keep the women in their place before they start disobeying us.” We certainly can’t have the men losing their authority. Oh no, that would certainly be a disastrous thing indeed.

Beautify Yourself for God First

So it happened that the search for a new queen began after Vashti was deposed. Esther was one of the women picked to be part of the King’s harem. I say “picked” because I have a feeling that she had no choice in the matter whatsoever. She had to submit to beauty preparations  and treatments so she could primp and preen before the king.

Beauty and Brains Do Go Together After All!

I cannot say with any certainty if Esther thought she was just going to “coast” it after catching the king’s eye and becoming the new queen. It was not long before Esther found herself in the middle of a storm; Haman the Agagite’s evil plan to annihilate the Jews. Her uncle, Mordecai, called her to action with the words we find in Esther 4:14, “..And who knows but that you have come to your royal position for such a time as this?”

Esther rallied the troops and called for a fast before she went in to see the king. She was a woman with a plan. When push came to shove, she did not become a wilting flower. She steeled herself and faced the battle head on. Victory and deliverance came to her people because of her strength. She was resourceful, strategic, and dependable. So it is that “evil will bow before the good, and the wicked at the gates of the righteous” – Proverbs 14:19. In the end Haman got to hang on his own gallows that he erected for Mordecai the Jew. Yes, our God will always avenge His people.

In conclusion, never ever sell yourself short. Whatever God has called you to do, He will give you the strength and resources to execute His purposes, so that others may be blessed. Whatever the circumstances you may find yourself in, always know that He is always working behind the scenes to achieve His purpose. He does have a purpose for your life, just be obedient in seeking out His will.

I hope you have been encouraged by these insights into the Book of Esther.

Image by Gerd Altmann from Pixabay

10 thoughts on “Beauty and Brains: The Book Of Esther Unveiled”

This site uses Akismet to reduce spam. Learn how your comment data is processed.